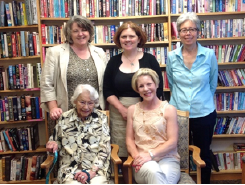 Members of the Class of 1956 gathered to watch The Addams Family on Sept. 18.

The daughter of Kathy Dlabal Rucker, C’65, Winston-Salem, N.C., was among those who greeted Pope Francis on the lawn of the White House on Sept. 22.

Mary Schmidt Walker-Baptiste, C’67, Waretown, N.J., and her husband, Lou, traveled with their parish to Philadelphia, Pa., to see Pope Francis at Papal Mass for World Meeting of Families.

Christine Lapcheske Reece, C’69, Montrose, Colo., retired after 23 years at the Ouray Public Library, and she moved to Montrose after living in Ouray for 28 years.

Alison Banikowski, C’75, Olathe, Kan., rallied the troops for Race for the Cure on Sept. 13. Allison’s Allies are pictured at the finish line.

Jeanette Murphy, C’75, Seattle, Wash., volunteers her time for Days for Girls International (daysforgirls.org). The group is sending 1,000 kits to girls in Cameroon who are not allowed to attend school during menstruation.

Sr. Elizabeth Youngs, C’78, Jefferson City, Mo., has a brother, Dan, who was among those selected to sing for the Pope’s Mass in Washington, D.C. on Sept. 23.

Denise Mertz Dickens, U’05, Olathe, Kan., is married to Tim Dickens. They have eight grandchildren.

Allison Berger Mulberry, U’11, Diamondhead, Miss., graduated from the University of Kansas with a Doctorate of Pharmacy in May. She and her husband, Bryan Mulberry, U’09, moved to Mississippi so that Allison can complete her pharmacy residency with the Veterans Affairs. Bryan is an applications consultant.

Danielle Dalton, U’12, Overland Park, Kan., was featured on KCTV5 news story titled, “Kansas teachers forced to do more with much less this school year.” The story covered how teachers are purchasing classroom supplies out of pocket, their need to be resourceful, and their desire to be creative in providing quality education.

Jay Simecka, M’12, was promoted to major in the Shawnee County sherriff’s office. Jay served several roles since his career began in 1994—including patrol, fugitive warrant, courthouse security, and community services units. He was promoted to sergeant in community services in 2007. In 2010, he achieved rank of lieutenant. Since then, he has supervised the community services, courthouse security, animal control, and patrol units. In July 2014, Simecka was appointed to the position of SWAT commander. Jay served 18 years in military service and is currently a captain in the Kansas Army National Guard. He served for eight years in the U.S. Marine Corps and received an honorable discharge in 1996.

Victor Guzman, U’12, Vicenza, Italy, is serving in the U.S. Army as a public affairs officer.

Matthew Deakyne, M’14, assistant professor of information systems and technology, is happy to announce the birth of his baby girl, Emberly, on July 14.

Joshua Bohr, U’14, Overland Park, Kan., became manager of eligibility services within the eligibility center at the NAIA National Office in Kansas City, Mo. His responsibilities include: applying the NAIA’s Rules and Bylaws for student athlete eligibility, reviewing students’ academic records as well as athletic history to assess first-time eligibility for incoming student athletes. Josh supervises and trains the seasonal employees the NAIA Eligibility Center hires for the busy season of
June-November.

Anthony Seda, M’15, Aberdeen, Md., ran for the office of the U.S. Senate in the state of Maryland.

Susan Nelson, associate professor of art, showcased her pottery from her 2014-15 sabbatical year. Two new bodies of work were displayed: multi-chamber flower arranging vessels and larger-scale sculptural vessels. The works explore the contrast between textured surfaces and smooth surfaces, along with organic form and surface decoration and geometric form and surface decoration. Her exhibit, “Merging Contrasts” was on display Oct. 9-Nov. 6. See a video of the exhibit at stmary.edu/SusanNelson.