On retiring: Though Sr. Susan always thought she’d know it was time to retire when she no longer enjoyed the classroom and students … that never happened for her. She still got a kick out of her students as much today as she did when she started. And her students? They admire her dedication to their success and raved about her courses.

“When I think of my time in Sr. Susan’s classes, I think about her passion for the literature, her students, and her colleagues. I always enjoyed going to her classes because she was such a welcoming presence. She taught us so much, both inside the classroom and out.” –Ally Schaffer, U’13

“As a professor and friend, Sr. Susan always saw endless possibility in all of her students. Her knowledge, love, humor, dedication, and passion shaped all of us.” – Jessica Hickson, C’07

How she plans to spend her free time: As Sr. Susan “takes steps toward learning how to retire,” she’s planning to continue her own writing, along with reviewing and possibly compiling other works by her dear friend and colleague Sr. Mary Janet. She also plans to adjunct at USM this fall.

Sr. Susan was honored at Commencement as a Professor Emerita of English.

Favorite class taught at USM: Dr. Logan has taught nearly every course in the Business Department at some point, but he notes Macro Economics and Leadership as his favorites.

Favorite activity at USM: Dr. Logan really enjoyed his time serving on The Rank & Tenure Committee—and he chaired the committee once.

What Dr. Logan loves to look back on: He loves seeing all the notes he’s received from USM graduates—showing their appreciation of the education they received here.

How he plans to spend his free time: Dr. Logan is really looking forward to spending more time with his wife and grandchildren, while he also plans to adjunct and volunteer in a reading skills program helping fight the ongoing problem of functional illiteracy.

Favorite memory made at USM: Dozens of memories came to mind, but Kathy pinpointed the 2008 Pinning Ceremony of the Bachelor of Science in Nursing graduates as one of the best. This was the first year the Sister Mary Erwin Baker Caring Award was given, and Sr. Mary Erwin was present to give the award. Jacky Asherman, C’08 was the first recipient—and would later become one of our nursing faculty.

On what she’ll miss most: For Kathy, there’s a long list:

How she plans to spend her free time: She’ll take some time to visit family out of state, attend her 50th class reunion from her school of nursing program, catch a Broadway Play, and swim in the ocean. 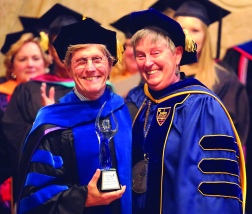 On memories made at USM: Dr. Le Beau has so many wonderful memories at USM that he had a hard time identify a favorite. He explained,

“If I had to list one, however, it would be commencement. After over three decades of commencement activities, they have never ceased to leave me with a renewed appreciation of why I picked this profession.”

How he plans to spend his free time: Dr. Le Beau will finish preparing his next book, which is due out in September. He will also be stepping up his work for the Higher Learning Commission, and he has a couple of boards he will serve on … while he may also return to part-time teaching.

He plans to stay in the area initially, but notes he and his wife may move closer to family—divided between Massachusetts and Texas.

Dr. Le Beau was honored at Convocation with the University of Saint Mary Caritas Award—which has only been awarded twice before. “Bryan will be sorely missed,” said President Sr. Diane Steele. “His ability to successfully launch new academic programs has been key to USM’s growth these past nine years. He is a scholar, administrator, and a dear friend.”

With very mixed emotions, we also say farewell to the one and only: Dr. David Greene, professor of psychology—an absence at USM that is hard to fathom. Dr. Greene explained though, “After 23 wonderful years at the University of Saint Mary, it’s time to honor my promise to return my wife to Colorado.” Dr. Greene’s son, Joshua, also lives in Denver, and they have other family in the state as well. He will continue teaching psychology at his graduate alma mater, the University of Northern Colorado.